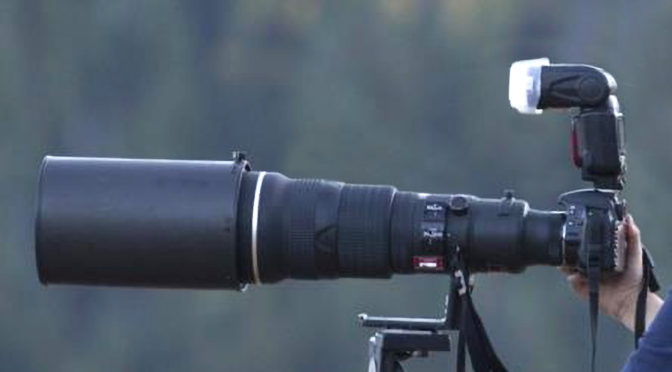 Hey friends! I thought I should post a comment about this common misconception about the use of a flash diffuser in wildlife photography.

A few years ago, I took a quick snapshot with my iPhone of a photographer’s setup photographing elk over 50 yards away. In fact, he wasn’t just a photographer, he was a photography instructor leading a group of other photographers on a “wildlife photography workshop.” I have since seen numerous “photography experts” advising the use of this exact setup, with the claim that a flash diffuser like the one used above will “soften the light and blend it more naturally in wildlife scenes.”

I don’t want to embarrass anyone who may do this, but actually this advice is totally incorrect. Adding a flash diffuser on a speedlight/flash while shooting wildlife with a telephoto lens like this is totally pointless, so don’t bother following that advice from “experts” who claim it is so important to do so.

Let’s say you just put a flash on top of your camera, without a diffuser. Depending on whether your flash has a zoom capability, its light distribution will vary a bit, but the light will be projected outward like below.

The only portion of the light that illuminates the elk are the light rays in the red region. The light that goes above the elk, into the sky, has no effect on the photograph.

IF you use a flash when doing wildlife photography, really the only thing you need to make sure you do is to not have the flash be a dominant source of light. It should only be adding a small amount of light on the animal, otherwise the photograph will not look natural.

In this case, with the elk being 50 yards away, it is not likely the flash will even have that much effect on the photograph, given the inverse square law of light will result in only a small amount of light illuminating the animal. That’s ok since you don’t want much light contribution from the flash anyway.

Now, let’s say we add a diffuser on the front of the flash because so many “experts” say that will soften the light on the animal. Note below how the light rays are just scattered more broadly by the diffuser. Doing so, does not “soften” the light whatsoever. It only scatters the light.

What’s worse, adding a diffuser will cut down on the light output of the flash by maybe 2 stops or so, right when the flash is already limited in being able to have much effect on a subject 50 yards away.

What that means is the diffuser, at most, is really just causing you to burn through batteries much more quickly because the flash will most likely have to push out a full-power pulse of light to have any effect at all, AND the light isn’t diffused anyway. And harder you make the flash work, the slower the recycle times.

Some people have questioned me on this, saying they have noticed that when they use a diffuser, it does seem to “soften” the light and make it not look as much like a flash was used. Actually, when that happens, what is really occurring is the diffuser is inhibiting the light output, so the ambient light is more dominant and the flash is less dominant. It is not really softening the light from the flash. It is just diminishing its light output by a couple of stops. You could also reduce the light output by reducing the power level of the light, or if you are shooting with TTL, use the flash exposure compensation to reduce the light output, and save your batteries. No need for a diffuser, ever, for a scenario like this.

Of course, this is a bit ironic, considering that little white device you can attach to your flash is often called a “diffuser” and ads for those devices often boast how they soften and diffuse the light, but that really is for indoor use where it scatters the light more broadly so it will bounce off more surfaces like walls and ceilings. For outdoor use, you won’t be bouncing the light off the sky. Keep your diffuser for indoor use. 🙂

Kevin's book "30 Practical Tips for Better Photographs" is available in print and on Kindle devices!

New Online Classes!
Where YOU Set the Price!

Available in print and on Kindle!
Rated ***** 5 stars by readers.
30 Practical Tips for Better Photographs

LifeInsights Group – You are invited!

See the work of some of my former/current students!